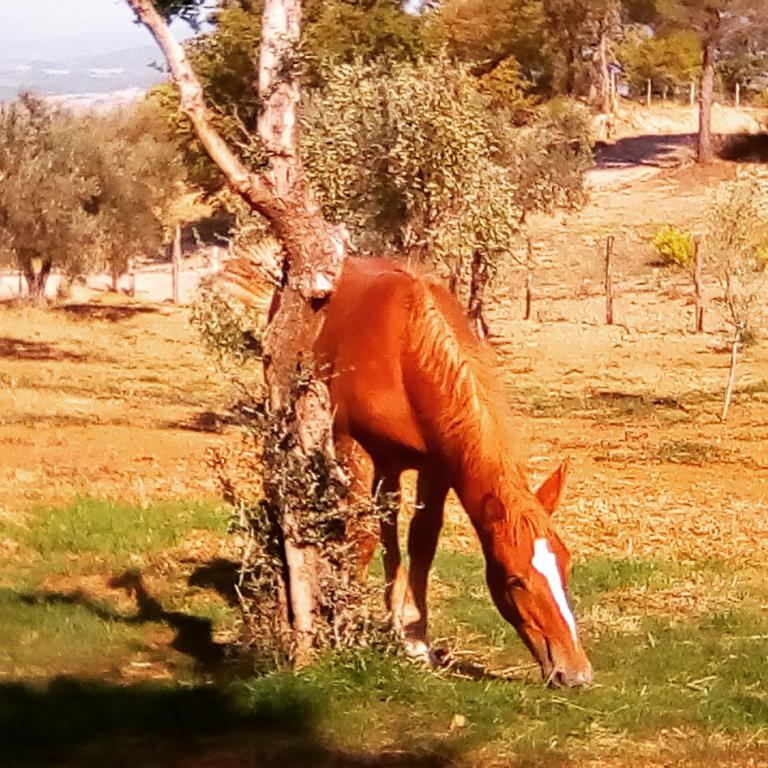 As Xantara became 6 months old, I decided the time was come to start weaning; Ria – her mother- was becoming skinny and the filly herself was eating and drinking completely independent. Of course she still drunk mother milk, but not that often any more. The idea of weaning Xantara, scared me but sooner or later it simply has to be done!

We don’t have a lot of space to sperate horses in a way that they can’t hear nor see each other. So I tried another strategy; I started feeding mother and foal seperatly. They were staying night and day in a paddock, as well as the other horses Puccini and Princess. Every morning and evening I brought all the horses to their stables where they can easily see each other. I haltered Ria and – being hungry- Xantara followed without any problem. Once Ria was eating (she does like eating a lot!), I was surprised I succeeded in convincing Xantara easily to come to the other box to eat her food. She did know the other stable because I fed her there together with her mother sometimes. During this first seperate feeding, I left the stable doors open and stayed with the foal. She was calm, getting used to this new situation, so I closed the door and prepared the hay in the paddock. I first took the mother out of the stable into the paddock and tied her to the fence; if they wanted, mother and foal could see each other. Then I haltered to foal and brought her to her mum. The first day this wasn’t easy because Ria and Xantare were always searching for each other. They got used to this procedure very fast (by the evening of the second day) and had confidence that all was well. The third day, I left them in their (seperate) stables a little longer while working the land with Puccini. The foal was always left in a stable between two other horses (mum and Princess).

Weaning day 1 – Since Xantara was relaxed about being in a different stable than her mother, I considered it was time for the actual step; weaning! I prepared “breakfast” as usual, and brought each horse in his stable. Nothing changed, I just didn’t bring them in the paddock again. All horses stayed in and were fed in there stables that evening. During the day everything had been very calm so I hoped to night would be fine too.

Weaning day 2 – When I checked on the horses in the morning, everything was quiet. I immagined there had been some difficult moment at a certain point; Princess kicked down her drinking bowl, which is not a habbit of hers. I suppose she got stressed because mother and foal were making a lot of noice wanting to be together. BUT we had to continue… I cleaned to foal in the stable and took the mare out to wash the swollen udder with cold water. I did the very same in the evening, and continued leaving the other horses in their stables.

Weaning day 3 – The morning check was calm, I couldn’t see anything unusual. So I continued the chosen strategy. I took Puccini out for work and afterwards Princess could stretch her legs for half an hour. Ria’s udder was very big, so I washed it several times with cold water. I wanted to walk around with her, hoping that it would do her some good. When I started doing so, it didn’t feel like a good idea; she became very nervous making her foal very nervous too. So I brought her in and brushed her a little to calm her down.

Weaning day 4 – I couldn’t stand the horses being inside the entire time, so i wanted to try bringing them to the different paddocks. First Princess and Xantara to the bigger paddock. Then Ria and Puccini in their own paddock. They were still able to see each other and espacially the foal was searching contact with her mother. Ria’s udder was starting to diminish. In the evening I brought everyone in again.

Weaning day 5 – I brought the horses outside as the day before. Ria start to loose interest in her foal, which stressed Xantara. She seemed lost and had little appetite. I left them outside also at night, hoping Xantara would bond with Princess a little more.

Weaning day 6 – When bringing them in for feeding, Xantara and Ria didn’t even search for each other, they didn’t make eye contact nor sniffed at each other; they went straight for the food!

I think I’ve been very lucky during this weaning week. Mum Ria seems to be happy to be without foal and Xantara bonded easily with Princess, I suppose she is an independent girl!